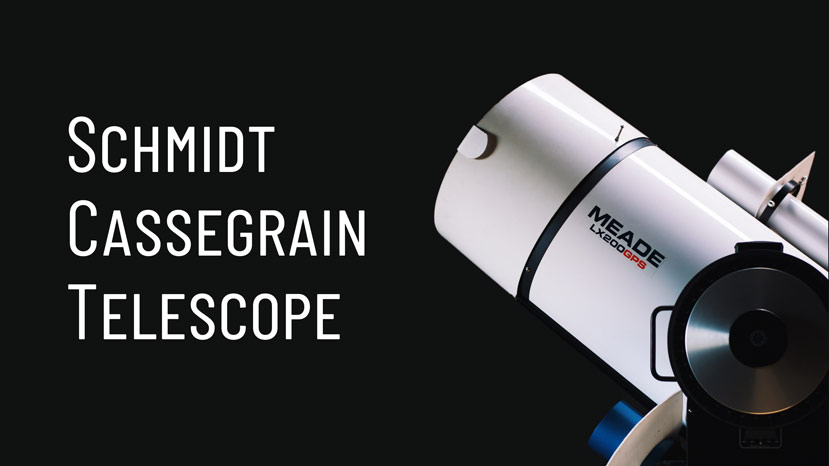 When I was a kid, I remember seeing a weird, short telescope at The Sharper Image at the mall. It didn’t look like any telescope I had seen before—more like an expensive coffee can.

I wasn’t sure what the deal was. Why didn’t it look like a regular telescope?

I later learned that this was a Schmidt-Cassegrain. I’ve also since figured out that if a telescope has the audacity to not look like a regular telescope, there’s probably a good reason for it.

We’re going to talk about the Schmidt-Cassegrain (SCT), as well as its cousin, the Maksutov-Cassegrain (MCT or “Mak”). And we’ll see how these telescopes benefit from their unconventional designs.

There are two terms that explain a lot about how these telescopes work.

It’s sort of like the TARDIS in Dr. Who: larger on the inside than the outside.

Unlike the TARDIS, these telescopes don’t actually travel through time. But they do allow you to see distant objects in space, which is essentially looking into the past.

Catadioptric: This means the telescopes aren’t exactly refractors or reflectors, but both. They use a glass corrector plate, which refracts the light, along with two mirrors that reflect the light.

So why combine refracting and reflecting, when you could choose one or the other?

The reason is that both approaches have flaws.

Refractors tend to have chromatic aberration (CA), which usually appears as color fringing. Expensive refractors are able to minimize CA, but they get, well, expensive.

Most reflectors have a flaw called coma. This is a type of aberration that distorts the shapes of stars (giving them a “tail”), especially when they are near the edge of the field fo view.

By combining a reflector plate and mirrors, Schmidt-Cassegrains and Maks can cancel out both of these flaws to a large extent. This results in optics with no major flaws, allowing you to use the telescope for almost anything.

Just a quick note about mirror shape: In a Newtonian reflector, the primary mirror generally needs to be parabolic to avoid spherical aberration. The problem is, parabolic mirrors are harder and more expensive to manufacture than spherical mirrors.

With Schmidt-Cassegrains and Maks, the corrector plate is specifically designed to correct for spherical aberration, which allows them to use spherical mirrors. This helps to bring down the costs a little bit, but unfortunately these telescopes are still a lot more expensive than most Newtonian reflectors.

Let’s first go over some of the pros and cons that apply to both types. Then we’ll dive into some of the differences between Schmidt-Cassegrains and Maksutovs.

Although they share many of the same design features, there are a few important differences.

A Schmidt-Cassegrain has a thin corrector plate that is flat on one side and “wavy” on the other. The primary mirror is spherical, and the secondary mirror (attached to the corrector plate) has a convex shape that can be either spherical or aspherical:

The Mak’s primary and secondary mirrors are spherical, and very often the secondary is simply a reflective circle “painted” in the center of the corrector plate:

So one of the interesting things about Maksutovs is that all of the optical surfaces are spherical. This is an elegant design that also has excellent performance. However, some Maks have aspheric mirrors or corrector plates to further improve the optics.

Theoretically, Schmidt-Cassegrains and Maksutovs can be made in a wide range of sizes. But in practice, Maksutovs tend to be smaller. Because the corrector plate is thicker, it becomes too heavy at large apertures.

It’s very common to see Maksutovs with apertures up to about 127mm (5 inches). Above 127mm, Schmidt-Cassegrains are more common because they have thinner, lighter corrector plates that can scale up more easily.

Below is a large Schmidt-Cassegrain with a 14-inch aperture. It also has a smaller finderscope attached to the upper-right:

All things being equal, a Maksutov is usually more expensive than a Schmidt-Cassegrain of the same size. However, there are many small, inexpensive Maksutovs, and I cover one of them (the Orion StarMax) in my article on grab-and-go telescopes.

Although both designs are more expensive than a Newtonian reflector, they can give some truly great views. These telescopes can be used to observe the planets, moon, sun (with a solar filter), and deep sky objects—basically, anything in the sky!