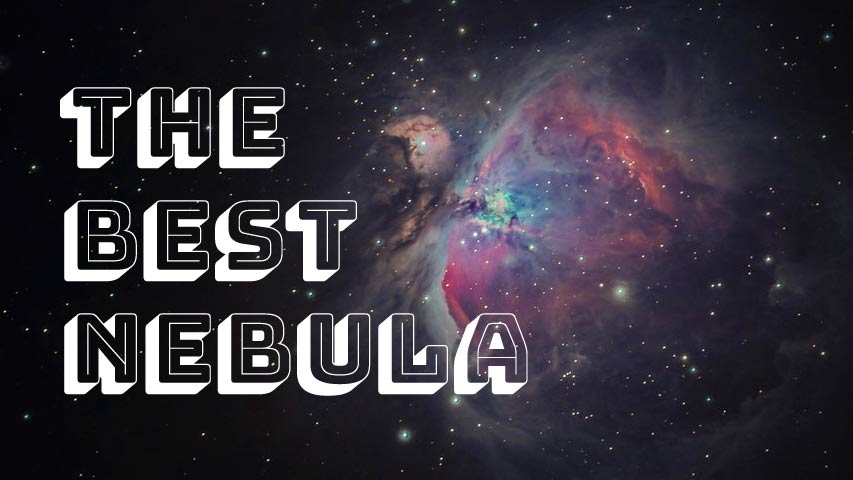 There are countless nebulas in the sky, and each one is amazing in its own way. Although they’re fairly dim when seen from Earth, telescopes can pull in enough light to allow us to see these distant space-clouds.

But if I had to choose the “best” nebula, there’s almost no contest.

The Orion Nebula is (not surprisingly) located in Orion, which is an equatorial constellation. That means it can be seen from the Northern and Southern hemispheres.

It’s bright (well, for a nebula)

The Orion Nebula is one of the brightest nebulas in the night sky. Technically, the Eta Carina nebula (a great Southern Hemisphere nebula) puts out more light, although that light is spread out over a larger surface area.

So why does brightness matter? Unlike stars, nebulas tend to be so dim that they are difficult to see at all. Many stargazers buy the largest telescope they can afford because they want to pull in more light to get better views of nebulas and galaxies.

With the Orion nebula, you don’t need a huge telescope to see it. In fact…

…You can see it with a telescope, binoculars, or the naked eye

It’s fairly easy to see with a small telescope. With a larger telescope, it’s even easier – and more stunning.

If you have a good pair of binoculars, you can use them to see the Orion Nebula. Since the magnification is lower, the nebula may appear as a small, faint “smudge”.

You can also see it with the naked eye, but only under very dark skies (away from any light pollution). It will appear fairly small since there is no magnification.

The constellation Orion is best viewed from about January through March. If you can see Orion’s belt, you’ll have a good chance at spotting the nebula.

How to find the Orion Nebula:

The Orion Nebula is an incredibly interesting object. But at first, you won’t see everything it has to offer. If you take time to really look at it, you’ll start to see more.

When you first spot the nebula, you’ll likely be looking at the Huygens region, which is the bright central area of the nebula.

The Trapezium is one of the most popular features of the Orion Nebula. It’s a group of stars in the middle of the Huygens region. They’re fairly close together, but with a telescope you can see four or more stars in a trapezoid shape.

The whole Orion Nebula is much bigger than just the Huygens region. Under dark skies (and with a little practice and/or a big telescope) you can start to see more of the dimmer regions. Essentially, as your observing skills grow, the Orion Nebula will grow with you.

To see these dimmer regions, you should seek out the darkest skies you can. Nebulas stand out much better against a dark background. Narrowband filters can also help make the nebula easier to see.

You may also want to try a few different eyepieces to get different magnifications. You might see something new with each eyepiece.

Although the Orion Nebula is one of the brightest nebulas, it’s still much dimmer than the moon and planets. So if it’s hard to see at first, don’t give up! With a little patience, the Orion Nebula will come into view – and you’ll be looking at a distant nebula with your own eyes.