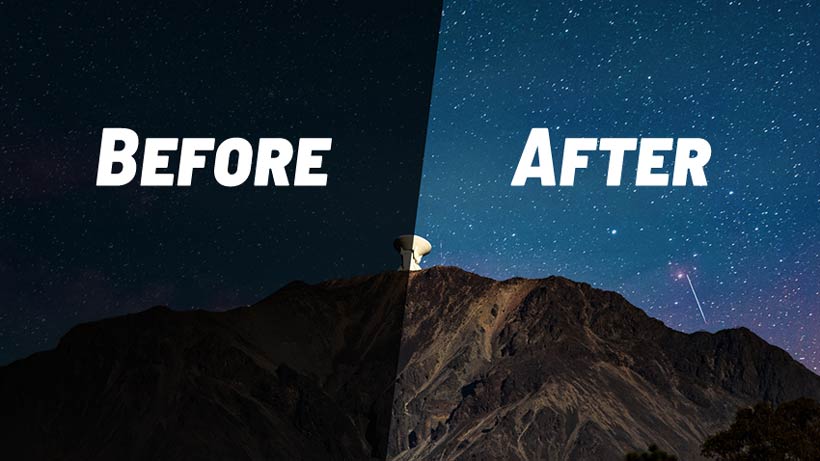 We live in a world full of lights. Nighttime never truly arrives when we’re surrounded by bright headlights, streetlights, smartphones, and more. So although our eyes are equipped with an incredible ability to adapt to the dark, we rarely experience it.

But we can still experience true dark adaptation (or night vision) under the right conditions, and it dramatically increases the number of night sky objects that we can see.

You probably already know that your pupils change size depending on the level of light. Step outside on a sunny day, and your pupils will contract almost immediately to block some of the light. Go into a dark room, and they’ll dilate to let in more light.

However, pupils are really just the first step in dark adaptation, and we’re going to talk about some other factors that have an even bigger effect on what we can see at night.

Aside from pupils, dark adaptation is mostly a chemical process. It takes 30 minutes to get roughly 90% dark-adapted, and it can take several hours to get fully dark-adapted.

Becoming dark-adapted is like building a house of cards. It takes time to build it up, but it can be knocked down in an instant – by a flashlight, headlights from a passing car, or a glance at a smartphone.

The retina senses light via two types of photoreceptor cells:

In practical terms, this means you can see much more color and detail during the day because the cones are working efficiently. But when it’s very dark, you’ll mostly see in black and white and with less sharpness because your rods are doing most of the work.

One other thing: The center of your retina does not have as many rods, which creates a kind of blind spot at night. To see extremely dim objects, you may need to look slightly away from the object, instead of directly at it. Astronomers call this technique averted vision.

Now that we’ve covered some of the basics, let’s look at how this process plays out.

After turning off any lights (including smartphones and tablets), your pupils will quickly dilate. They may dilate to a diameter of 7mm if you’re relatively young, but if you’re middle-aged or older they may only be 5mm.

The rods will continue to become more sensitive over the next few hours as they regenerate a receptor protein called rhodopsin.

At this point, the rhodopsin has mostly been replenished, so you should be about 90% dark-adapted. It’s difficult to see much improvement beyond this point, and many astronomers consider the 30-minute mark to be the point at which they are well-adapted to the dark.

After a few hours, your dark adaptation may even go beyond the 90% mark. This can be hard to do, as it requires a very dark site with essentially no artificial light.

But there’s a catch

The timeline above is not a guarantee. Any bright light source will cause this timeline to restart (or at least set you back by 20 minutes or so). Also, very bright sun earlier the same day can make dark adaptation slower.

Rhodopsin plays a large role in dark adaptation because it’s so sensitive. But light causes it to deteriorate rapidly, in a process called photobleaching. Basically, all the rhodopsin you have built up over the previous 30+ minutes disappears, and it will take time for your retina to replenish it.

So if you’re trying to get dark-adapted, it’s absolutely crucial to avoid light – a flashlight or smartphone can undo hours of dark adaptation in mere seconds.

There are a few things you can do to help preserve your night vision:

If you’re careful about keeping your dark adaptation, longer observing sessions will reward you with better and better views. Areas of the sky that previously looked empty will gradually become populated by nebulas, galaxies, star clusters, and more.