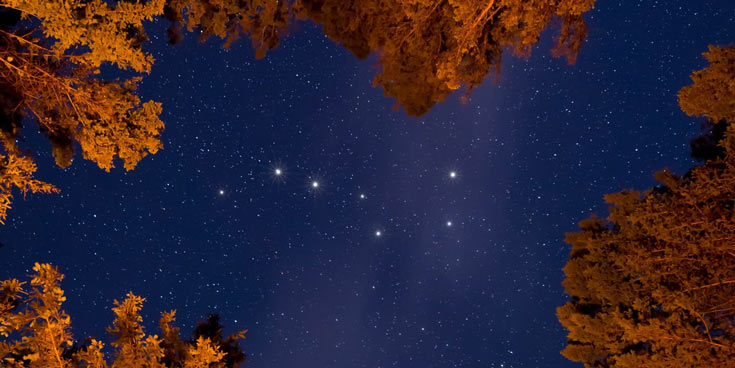 The Big Dipper is not a constellation.

For that matter, Orion’s Belt isn’t a constellation.

Neither are the bright Summer Triangle or Winter Triangle.

So if they aren’t constellations, what in the George Ellery Hale are they?

These examples are actually asterisms. An asterism is an arrangement of stars that forms some kind of shape – usually a fairly bright or recognizable shape (like the Big Dipper).

“But wait,” you might say, “isn’t that what a constellation is?”

Well, not exactly. This actually brings us to a bigger question:

What is a constellation?

To understand exactly what a constellation is, we’ll need to go back in time.

The year is 1922. James Joyce has just published Ulysses. The silent film Nosferatu is sweeping Germany. Stan Lee is born.

And the International Astronomical Union (IAU) has just decided on a list of 88 constellations to officially recognize.

Now these weren’t brand new constellations. Many of them (like Orion, Andromeda, and Pegasus) had been recognized by the ancient Greeks and even earlier civilizations. The IAU’s list was intended to standardize the constellations so astronomers around the world could use consistent names and collaborate more easily.

The next big change happened in 1928. The IAU expanded each constellation to include not only the stars themselves, but the surrounding area of sky. Together, the 88 constellations now covered the entire sky. For example, the white area in the image below shows the boundaries of Orion:

The IAU constellations are still used today. Because each part of the sky “belongs” to a specific constellation, it offers a brief, unambiguous way to describe where an object is located.

For example, if a new galaxy is discovered within the boundaries of Lyra, we could say that the galaxy is in Lyra (although in reality the galaxy is much farther away).

Back to the Big Dipper

But that doesn’t mean it isn’t part of a constellation. Remember, every area of the sky is part of some constellation, and in this case the Big Dipper is part of Ursa Major (the Great Bear).

There are countless asterisms in the sky, and below are a few of the more popular ones.

Unlike constellations, there is no “official list” of asterisms and no limits to how many there can be. So if you see an interesting shape or pattern in the sky, why not give it a name of your own?