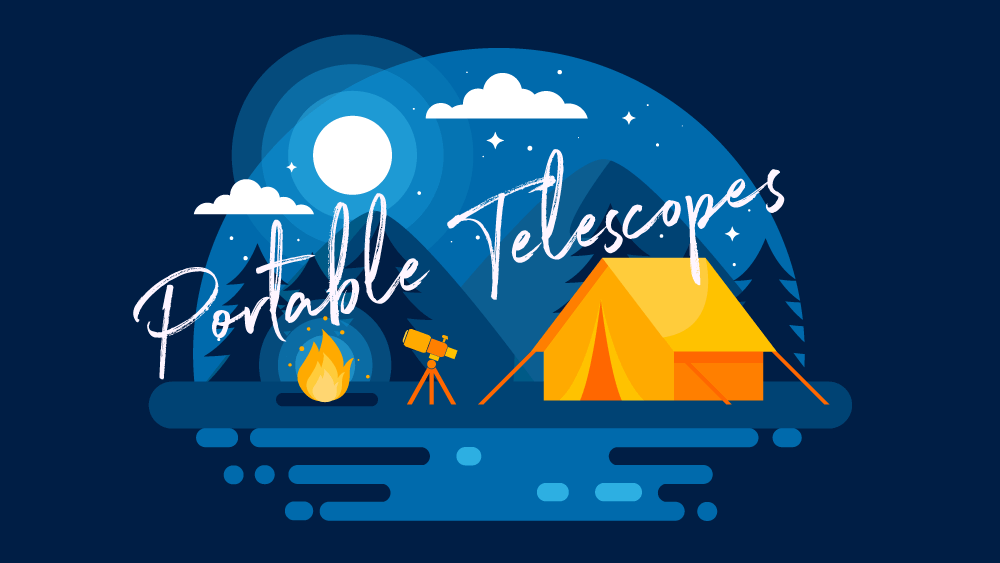 In the photography world, there is a saying: “The best camera is the one you have with you.”

The same applies to telescopes. Even if a larger telescope can technically give better views, that won’t help you if you aren’t able to bring the telescope with you!

That’s where the “grab-and-go” telescope comes in. This is a portable telescope that you can throw in the back seat of your car (gently, of course) or possibly even carry with you in a backpack.

Because they’re so portable, it’s easier to take them to remote areas with darker skies. If you’re headed to the mountains for a car camping trip or going out to the country, you may not be able to bring a large Dobsonian – but your grab-and-go scope will ensure that you are ready in case your destination has clear skies.

The Orion StarBlast can be purchased with a few different mounts, but this version has a “tabletop Dobsonian” mount, which makes it an excellent grab-and-go scope.

This certainly isn’t the most portable scope on our list (it’s bigger and heavier than the Celestron 70mm, and you’ll never fit it in a backpack). What makes this scope special is that it’s actually a fairly serious telescope in terms of optics and features, while still being relatively portable.

The StarBlast is a Newtonian reflector with a 4.5″ (114mm) parabolic primary mirror. Parabolic is the ideal shape for a Newtonian, but many small telescopes use spherical mirrors instead to save on cost. The parabolic mirror shows that Orion designed this as a “real” telescope without cutting any big corners.

While a 4.5″ aperture isn’t huge, it’s bigger than most portable scopes, allowing it to pull in more light. You can do some real observing with this thing, especially if you travel away from city lights.

I’ve personally used my StarBlast to observe the Veil Nebula, which is a fairly faint object. I’ve also used it to see various faint galaxies, as well as the moon, planets, sun (with a solar filter, of course), and many other objects.

I’ll admit, this telescope looks a bit funny to me because Orion has loaded it with a bunch of features that are usually found on larger telescopes:

The tabletop Dobsonian mount is one of the biggest “pros” of this telescope, as well as a potential “con”.

Just like a larger Dobsonian telescope, this type of mount is much more stable than a flimsy tripod. That means you’ll have less wobble to deal with, giving you better views.

Unlike a larger Dob, it’s very easy to transport this telescope in one piece – in fact, the mount has a handle to make it even more convenient.

It’s easy to adjust the tension to control how the mount moves, and the telescope can also be rebalanced if you want to use a much heavier eyepiece.

But there is a downside to the tabletop Dobsonian design. Since everything is fairly small, you’ll either need to elevate it by putting it on a table (hence the name), or place it on the ground and sit or kneel next to it (make sure the ground isn’t wet!). If you don’t have a table handy, you can also put it on the hood of a car – it doesn’t really matter if it’s perfectly level.

Click to see the Orion StarBlast 4.5″ Reflector on Amazon.com

In many ways, this telescope is very similar to the Orion StarBlast. It’s the same type of telescope (Newtonian reflector), and the tabletop Dobsonian mount is almost identical.

Like the StarBlast, the Zhumell Z130 has a parabolic mirror. Optically, the two telescopes should give very comparable views.

The main differences for the Zhumell are:

The Zhumell also comes in two smaller versions, with 114mm and 100mm apertures.

Click to see the Zhumell Z130 Reflector on Amazon.com

On the surface, the Orion StarMax may look a lot like the Orion StarBlast or the Zhumell Z130, but it’s actually a completely different type of telescope: a Maksutov-Cassegrain.

Unlike a simple Newtonian reflector, a Maksutov-Cassegrain (or “Mak”) uses a combination of mirrors and a glass corrector plate to fold the light back and forth inside the optical tube. This allows a Mak to have a longer focal length while keeping the size very compact. Even though the StarMax is much smaller than the StarBlast, the focal length is 1250mm – almost 3x longer than that of the StarBlast.

On the other hand, the small 90mm aperture of the StarMax does actually limit how high you can push the magnification. Although it will do fine with the included eyepieces, using a Barlow lens or a shorter focal length eyepiece to raise the magnification even higher may not give good results, as the image will tend to get blurry.

Some of the other features of the Orion StarMax include:

This is another tabletop Dobsonian, but it’s even smaller than the Orion StarBlast, StarMax, or Zhumell Z130. It has a 76mm aperture, so it won’t pull in as much light as the other scopes. On the other hand, it only weighs 4.5 lbs (2 kg), making it very portable and a good choice for kids.

This is designed to be a very inexpensive telescope, and that means corners had to be cut. For example:

Given the price and the portability, this telescope is still a good deal if you know what you’re getting. But unlike the Orion StarBlast or Zhumell Z130, the FirstScope doesn’t offer as much room to grow. If you buy the FirstScope and discover that you really love astronomy, you’ll probably want to upgrade to a better telescope.

If you already know that you love astronomy, you may want to start with the StarBlast or Z130 (or a larger Dobsonian). It will be well worth the extra money – the views will be significantly better.

The main features include:

Finding objects without a finderscope

With the included 20mm eyepiece, the magnification is only 15x, which is actually a good thing! The low magnification allows this telescope to capture a wide area of sky, which makes it relatively easy to find objects even without a finderscope.

Whenever you want to find an object, start with the 20mm eyepiece. Once you find what you’re looking for, you can switch to the 4mm eyepiece if you want higher magnification. Just make sure the object is well centered before switching eyepieces so you don’t lose it.

Based on optics alone, this telescope would not make the list. It has a smaller aperture than the other telescopes we’ve covered, and as a cheap refractor (with a relatively flimsy tripod) it isn’t the ideal tool for observing the night sky.

But every telescope involves some kind of compromise, and this one puts the emphasis more on extreme portability and affordability. Unlike the other telescopes on this list (which have to be carried), this one fits entirely inside the included backpack.

As I mentioned earlier, the best telescope is the one you have with you, so the portability of this telescope may allow you to bring it with you to more places than the other telescopes on this list.

The telescope itself is a refractor (it has lenses instead of mirrors) with a 70mm aperture and 400mm focal length. It weighs 4.2 lbs (1.9kg).

The included eyepieces (20mm and 10mm) will give magnifications of 20x and 40x. You can use an even lower focal length eyepiece if you have one, to get a higher magnification. But due to the small aperture and entry-level optics, you won’t get great views at high magnifications. It’s better to use this telescope at low magnifications, which will give brighter, wider-angle views.

It includes a 45° erect image diagonal. This means you can use the telescope for birdwatching or other terrestrial viewing (unlike many reflector telescopes, which flip the image).

Who is this telescope for?

Like the Celestron FirstScope, this telescope is designed to be inexpensive and portable. The optics are not great, so this scope may not be for everyone. I think this telescope is mainly for someone who wants something they can take on hikes and use primarily for terrestrial viewing. Then, if the skies are clear at night, this telescope can also be used for astronomy.

However, if you want a telescope that is more optimized for astronomy, and don’t mind carrying it by hand, I would strongly recommend getting the Orion StarBlast, Zhumell Z130, or Orion StarMax instead. Any of those telescopes will give better views of the night sky.

Note: The Celestron Travel Scope also comes in a 50mm and an 80mm version, which you may want to check out if you would like a lighter or larger telescope. They have slightly different accessories (the 50mm version has a 3x barlow lens for higher magnification).

Click here to see the Celestron 21035 Travel Scope on Amazon.com